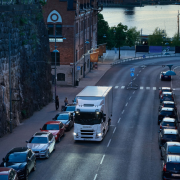 Electric trucks – increasingly compelling option
16 SEPTEMBER 2020
Transport buyers, cities and consumers are having a strong pull effect on the shift of the heavy transport industry to sustainable transport solutions, particularly electrification. This is creating a good upside on revenues at the same time as technological advances make the cost of operations much more favourable. It all adds up to the fact that electrification is a solution whose time has come.
There are several different technologies that will enable the world to decarbonise the transport system and help Scania meet its own science-based climate targets. Electrification will, without question, play a crucial part in achieving decarbonisation.

In the mid-term, Scania expects that the total cost of ownership of battery-powered heavy distribution trucks will be comparable with vehicles powered by fossil fuels. Batteries will become less expensive, and their service life will grow. This paves the way not only for electrified distribution trucks but also, in few years’ time, for long-distance electrified operations.

However, it’s not just about the vehicles. Electrification can only take off if we work together with our customers and our partners on the infrastructure side and energy supply. Then we can get electric trucks running on renewable energy out on the roads . Additionally we need public investments in charging infrastructure and build out of the energy grid.
Shifting cost split
Purchasing a new truck always represents a significant investment and electric trucks are currently undoubtedly more expensive than conventional vehicles. But it’s also important to note that the heavy transport industry’s true measure of value comes from total cost of ownership and operation, and this is where the electric truck proves its worth. No more dealing with high (and ever-fluctuating) fuel bills. And the electric truck customer is able to benefit from the full Scania offer, including financing, service and maintenance, and driver service and assistance packages, like any other truck buyer.

As the technology develops to produce lighter, smaller, more energy-intensive models, the cost of electric-power batteries has and will continue to decrease significantly. Charging is also part of the customer offer that Scania, with partners, can provide to electric truck owners, to optimise the vehicle for current and future operational needs. Overall, there’s a trend towards a positive cost split for electric trucks, which is great news for fleet owners.

Competitive advantages of electric vehicles
Public policy is having a big impact on the viability of electric vehicles. A number of major cities around the world have signalled that they will gradually phase out diesel vehicles from their streets. In fact, there are presently no fewer than 274 low-emission zones in 11 European countries that restrict access to polluting vehicles in cities, provinces and regions.

Such initiatives give non-fossil-fuel vehicles, especially electric vehicles, the competitive advantage of full access to city centres, something which Scania’s new electric truck is poised to exploit.

A further competitive advantage comes from electric engines’ potential for use in night-time or ‘off-peak’ distribution, using Scania’s battery electric and hybrid trucks. Many cities restrict deliveries overnight due to concerns over noise and emissions. The City of Stockholm, for instance, prohibits all heavy truck traffic between 10pm and 6am.

However, in 2019, a trial in Stockholm by transport company HAVI, McDonald’s, the Royal Institute of Technology and Scania found that, on average, zero-emission off-peak deliveries by a Scania hybrid-electric truck were 30 percent quicker than the average for the equivalent daytime transport route. And these night-time deliveries were an average 38 percent quicker than daytime deliveries made during the narrower timespan of 7am to 12 noon.

Less driving time, less queuing, better parking availability and of course no emissions when a truck is switched to electric mode all make a persuasive case for electric propulsion. Distributors and refuse collection departments are taking a great interest.

Better air quality
The low or zero-emission transports that are a hallmark of hybrid-electric and full-electric vehicles are good news for air quality, too. The night-time trial with the two Scania trucks also showed a clear reduction in nitrogen oxide particle levels: these NOx particles are a major contributor to poor air quality and associated public health issues including respiratory diseases.

And the ability of electric vehicles to operate during the night is not only a good business opportunity; it would also reduce the number of accidents befalling delivery drivers, as well as damage to the trucks, that can unfortunately occur during busy daytime delivery slots.
Momentum is with the technology
Ultimately, a combination of the above factors and the urgent environmental imperatives make the adoption of electric vehicles and the success of electric propulsion likely.

To make this happen, the TRATON Group, to which Scania belongs, is channelling its combined R&D budget into developing electric trucks and buses and will, by 2025, spend more than €1 billion in electro mobility.

Scania’s launch of a new electric truck is, along with the plug-in hybrid electric truck, just further proof that this technology has the momentum to help change the heavy transport sector, and our world, for good.
MORE NEWS
Milestone in Scania’s electrification – introduces first commercial electric truck range
Scania today commercially launches its range of electric trucks, a milestone in its aim to be leading in the transition to a sustainable transport system. The high-performance plug-in hybrid and fully electric trucks initially focus on urban applications, including distribution to retailers.
READ ENTIRE PRESS RELEASE HERE
How electric vehicles fit into Scania’s sustainability journey
The launch of Scania’s fully electric truck is a milestone on the company and its customers’ journey to a fossil-free commercial transport system. It also underlines the central importance of electric vehicle technology to Scania’s sustainability commitment.
READ ENTIRE ARTICLE HERE

Want to join the discussion?
Feel free to contribute!